Azure Managed Disks - What are they and how to use them

Every service that you use in Azure uses storage. We want everything that we create in Azure to be persistent because if it would be temporary, then we would have a problem. When you create a Virtual Machine, you need to create one or two storage accounts where the VMs disks and diagnostic data will sit. This worked well for a while, but when we’re talking about scale, then this becomes an issue when you’re talking about high availability, disaster recovery or even disk maintenance.

To solve the problems from above and all other VM storage-related problems, Microsoft announced a new type of offering called “Managed Disks.”

Why were storage accounts a problem for Virtual Machines?

For starters; Using the ARM model, you would create VMs in a Resource Group and select one single storage account where all those VM disks would sit in. The problem was that when you’re provisioning a storage account, basically you’re tying it to a storage stamp (cluster) and you would get limited performance and scalability. Storage in Azure has the biggest SLA when compared to other services, but it’s not 100%, and mistakes/issues do happen. When you’re saving all your OS / Data disks in one storage account thus having all your eggs in one basket which you should know by now that that’s a bad thing ?
To make matters worse, each storage account has a limited amount of IOPS and can have a limited number of disks, e.g., 30000 IOPS for standard storage and 50000 IOPS for premium storage. With ten premium storage disks, you would hit the storage account limits.

Usually, people created 5-10-20 VMs per a single storage account and then they had performance issues because, in peaks, those VMs were consuming all the IOPS of that storage account. Performance is not the single problem that you would have, the other problem was availability, you would create a couple of VMs, set them in an Availability Group for that 99.95% SLA and then a storage issue would happen, and all of them go down. Why? Well because your storage account was created in a single storage cluster which had a problem.

The solution to most of the performance/availability problems were to architect your VM deployments in such a way to benefit from multiple storage accounts. You would create for example 5 storage accounts and use them in a mesh so that if one of them goes down then you’re still online, but that added more work to the IT Admin who had to manage more than one storage account.

How does Managed Disks solve all of those problems?

The idea of Managed Disks was to simply IaaS VMs management and security by removing storage accounts from the equation. When you want to create a VM with a managed disk, you specify the type (Standard or Premium) and Azure does all the work for you. No more architecting and managing storage accounts, no more scalability issues and the best one is that each managed disk is considered an ARM resource in the Azure portal, thus granting you the ability to apply RBAC rules to them.

By using Managed Disks, you would get some excellent benefits like:

This is just the tip of the iceberg.

Now from a price standpoint things changed a bit. With regular standard storage accounts (not premium) you would be billed the Pay-As-You-Go model, meaning that if I use 1 GB then I pay for 1GB even tho I provisioned a 1 TB disk for my VM. Managed disks are don’t have the same billing model. With them, you pay a fixed amount for each one you provision. If you provision ten 1 TB disks, then you would pay ten times x 1 TB disk at today’s rate. If you use premium disks, then you know exactly the price model. You won’t pay the same price as you would pay for a premium disk but just so that you know, this will be a fixed price depending on the size of the disk.

From a business standpoint, this makes much more sense because you can actually price VMs much easier. You have one VM, and an N amount of disks that costs X. No more storage transactions or any other “hidden” costs.

I won’t reference any price because these change and this would become outdated information faster than I press submit ?

The size model is almost identical to the premium disk offering; You have S4, S6, S10, S20 and S30 Standard disks and for reference, I have attached a screenshot with Standard and Premium disks performance and limits.

Talking about simplicity, creating a VM with a Managed Disk is easy as you would say 1,2,3. When you create a VM from the portal, you have a step where you have to configure networking, and in that step, you will be asked if you want to use managed disks. If you press yes then that’s it ? 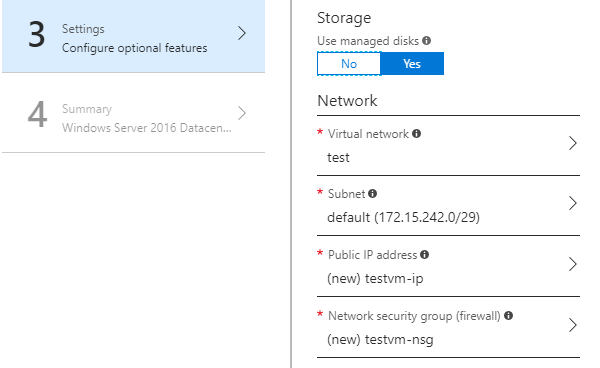 From a high availability standpoint, you are not obligated anymore to put all your eggs in one basket or do storage account design to have high availability in case of an underlying storage issue. When you create a Managed Disk, you provision that much space on a storage stamp, and when you create another one, it will go to a different stamp thus having multiple fault domains.

I will end this right here as I don’t want to add too much wall of text to a single blog post. I suggest that you give them a try and see what you get ?

NSG in ARM Template - Little nugget to be careful of

In my last blog post [https://florinloghiade.ro/2017/02/azure-managed-disks-what-are-they-and-how-to-use-them/] , I talked about why we should

Azure Managed Disks - What are they and how to use them

Every service that you use in Azure uses storage. We want everything that we create in Azure to be persistent because if it would be temporary