In a previous blog post, I talked about how excellent the managed Kubernetes service is in Azure and in another blog post I spoke about Azure Container Instances. In this blog post, we will be combining them so that we get the best of both worlds.

We know that we can use ACI for some simple scenarios like task automation, CI/CD agents like VSTS agents (Windows or Linux), simple web servers and so on but it’s another thing that we need to manage. Even though that ACI has almost no strings attached, e.g. no VM management, custom resource sizing and fast startup, we still may want to control them from a single pane of glass.

ACI doesn’t provide you with auto-scaling, rolling upgrades, load balancing and affinity/anti-affinity, that’s the work of a container orchestrator. So if we want the best of both worlds, we need an ACI connector.

The ACI Connector is a virtual kubelet that get’s installed on your AKS cluster, and from there you can deploy containers just by merely referencing the node.

If you’re interested in the project, you can take a look here.

To install the ACI Connector, we need to cover some prerequisites.
The first thing that we need to do is to do is to create a service principal for the ACI connector. You can follow this document here on how to do it.

When you’ve created the SPN, grant it contributor rights on your AKS Resource Group and then continue with the setup.

I won’t be covering the Windows Subsystem for Linux or any other bash system as those have different prerequisites. What I will cover in this blog post is how to get started using the Azure Cloud Shell.

So pop open an Azure Cloud Shell and (assuming you already have an AKS cluster) get the credentials.

The reason that you need to initialize helm and upgrade tiller is not very clear to me but I believe that helm and tiller should be installed and upgraded to the latest version every time.

Once those are installed, you’re ready to install the ACI connector as a virtual kubelet. Azure CLI installs the connector using a helm chart. Type in the command below using the SPN you created.

As you can see the in command from above, I typed both for the –os-type. ACI supports Windows and Linux containers so there’s no reason not to get both 🙂 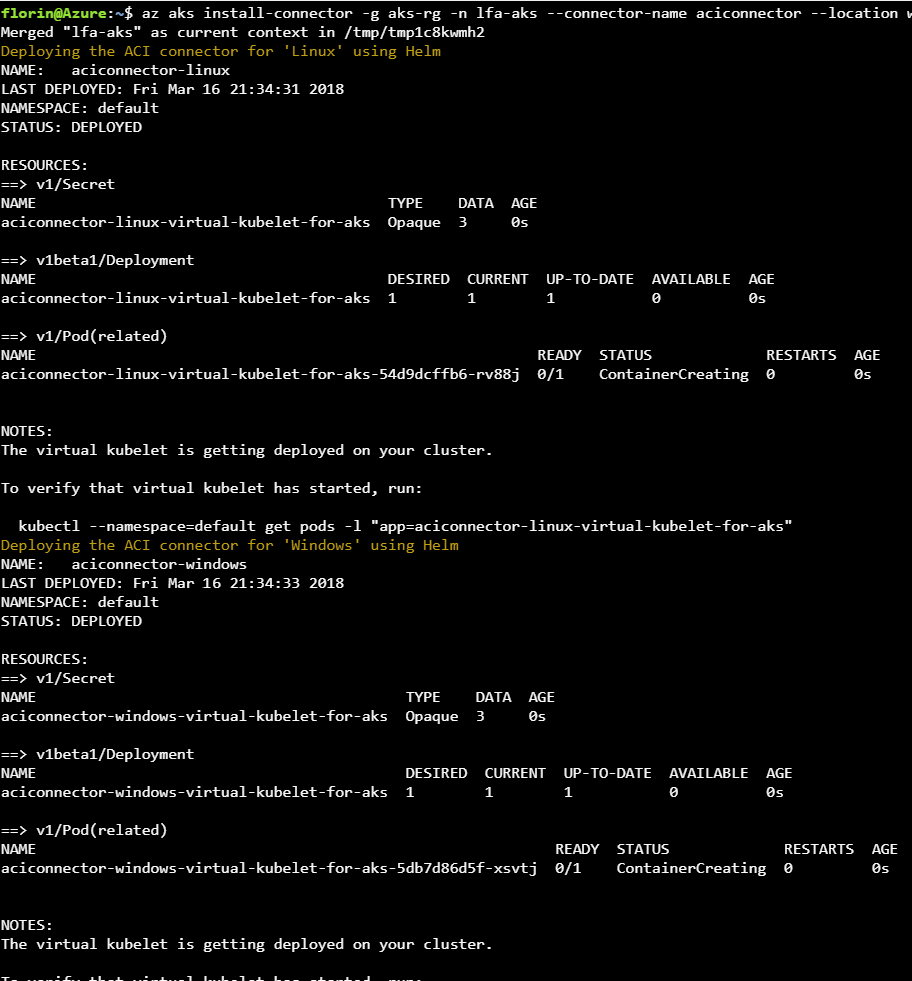 After the install, you can query the Kubernetes cluster for the ACI Connector.

Now that the kubelet is installed, all you need to do is just to run kubectl -f create YAML file, and you’re done 🙂

If you want to target the ACI Connector with the YAML file, you need to reference a nodeName of virtual-kubelet-ACICONNECTORNAME-linux or windows.

You run that example from above and the AKS cluster will provision an ACI for you.

What you should know

The ACI connector allows the Kubernetes cluster to connect to Azure and provision Container Instances for you. That doesn’t mean that it will provision the containers in the same VNET as the K8 is so you can do some burst processing or those types of workloads. This is let’s say an alpha concept which is being built upon and new ways of using it are being presented every day. I have been asked by people, what’s the purpose of this thing because I cannot connect to it, but the fact is that you cannot expect that much from a preview product. I have given suggestions on how to improve it, and I suggest you should too.

Well that’s it for today. As always have a good one!

Azure MySQL as a Service - What is it

In a previous blog post, I talked about how excellent the managed Kubernetes service is in Azure and in another blog post I spoke about Azure

You’ve probably heard of containers and what you can do with them in some simple scenarios. Containers brought an exciting concept in ap